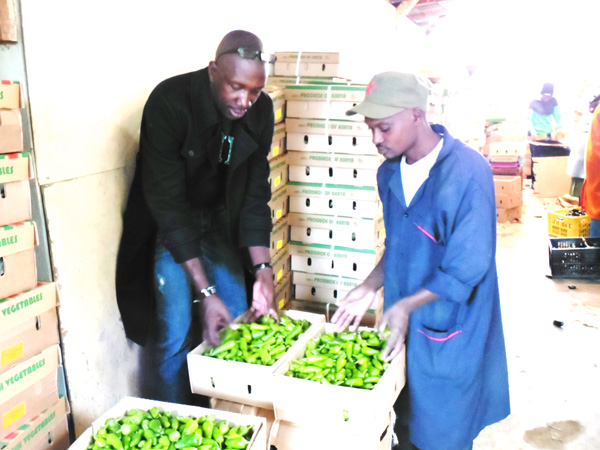 Paul Rangenga, left, with one of his workers as they inspect packaged bullet chilli for export. PHOTO BY P.C KIPNG'ENO.

For the last nine years, Paul Rangenga has been growing and exporting bullet chilli to Europe. That time is enough to have made him master the tricks of the business, moving from marketing assistance, into a grower and exporter.

His next plans are to establish a network of out growers who will supply him with the bullet chilli to meet the growing market in Europe.

However, the outbreak of the coronavirus has slowed the business, but that has erased Paul’s plan to move ahead with his expansion plans, hoping not only to create more wealth but also employment opportunities for farmers who will get into his out grower programme.

While coronavirus may have stalled his plans, it has not dampened the resolve of the 44-year-old who started with a capital of Sh85,000 in 2011, after visiting a friend in Kitengela, who was growing the crop.

“I visited my friend here in Kitengela and found bullet chilli growing on his farm. Unfortunately, he had no market and he was planning to cut the crop down, but I persuaded him not to do so,” says the farmer.

His experience in sales and marketing came in handy in helping his friend find a market. He succeeded in securing the market for his friend’s produce through another friend of his, who was exporting bullet chilli to overseas.

It is at that time that it dawned on him that the market for bullet chilli in Europe is huge. He did not hesitate to get into the business and the results have never disappointed.

Why bullet chilli is the best

Also, it not labour intensive, it is easy to manage and harvest,” reveals the farmer, who carries out bullet chilli farming in a two-acre farm in Kitengela, Kajiado County.

Though it is tough for farmers in the area to carry out farming activities due to shortage of rains, this has not deterred him from engaging in the farming of the crop.

The farmer says that water is key in the area, and any wise farmer ought to invest first in getting water, before embarking on any farming activity.

“We have drilled a borehole which enables us to get water to irrigate the crops throughout the year,” says Rangenga, adding that there must be water stored in tanks also, to be used when there is no power.
Bullet chilli takes twelve weeks or three months before a farmer starts harvesting the produce.

In order to produce quality produce which is good for export, a farmer should ensure that his farm has the requisite standards required by Horticultural Crops Directorate (HCD) and Kenya Plant Health Inspectorate Service (KEPHIS).
The only big challenge that the farmer has been experiencing is lack of enough workers, especially during harvesting of the produce.

“My advice to farmers is to be careful about diseases and pests that attack this crop. It is good to prevent them before ravaging the crops, since prevention is better than cure.”

The market for their produce is in England, Germany, Norway, among other overseas countries.
The farmer, who is also an agronomist, advises that bullet chillis ought to be sold when they are still green in colour, and not when they have turned into red.

He says that the produce is can be sold per kilo, or using a 4.5 kg box. The 4.5 kg box sells at a price of Sh420.
For those who would like to venture into bullet chilli farming, Rangenga urges them to do so, since there is a ready market for the produce. Nevertheless, they should know that there are some challenges that they have to embrace.

In one week, the farmer harvests 1.4 tonnes of bullet chilli, and in one season, which is about five months, he gets a total of 28 tonnes, in an acre piece of land. In the two acres that he uses, he gets a total of 56 tonnes. He reveals that he can pocket up to Sh2.8 million profit per season from the crop.

He is optimistic that in future, he will register other farmers who grow bullet chilli, and create more employment opportunities.
editor@financialday.co.ke