KAMUNDIA MURIITHI Two farmers have been savvy enough to take advantage of the growing demand for arrowrroots. Now, they are smilling all the way to the bank. 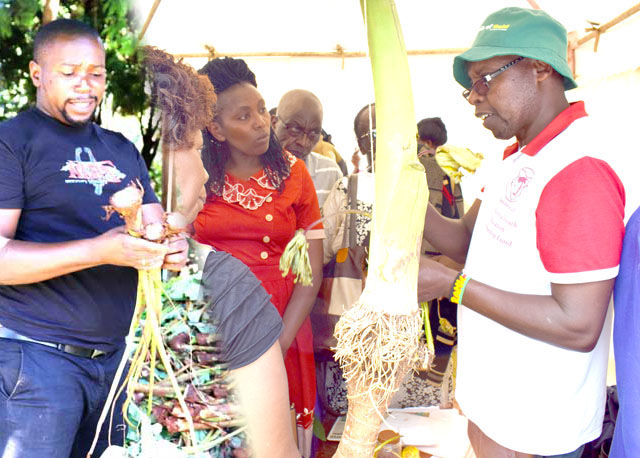 Martin Muto from Embu, left, and Francis Maathai from Nakuru have taken advantage of sharp demand in arrowroots to cash in on seedlings market. Image by Kamundia Muriithi and Kimuri Mwangi.

He is among savvy farmers who are reaping from the demand of the tuber food from health-conscious Kenyans.

Traditionally food for dinner and breakfast in the village life, the arrowroot became tea time food among the growing elite, and now, in its mashed form, has also made it back to the dinner table.

Muto, an official of the Agriculture Society of Kenya (ASK) has an arrowroots nursery at his farm in Ngoroeri area of Kyeni North Ward, Embu County from where he supplies suckers to other farmers in different parts of the country.

He ventured into arrowroots farming in 2014 and since then, he has enriched himself with skills and experiences in the tuber’s farming right from planting to harvesting and marketing.

The nursery is approved by the Kenya Agricultural and Livestock Research Organisation, which also provided him with information on the crop’s husbandry when he started the venture.

Muto fetches the suckers for sale mainly from his farm but when demand is high, he buys from other farmers in Embu, Kirinyaga and Tharaka-Nithi Counties.

“The demand for arrowroots is steep.”

He supplies to large institutions and recently bagged a tender to supply a large volume to a county government that is supporting its farmers to cultivate arrowroots.

Once he uproots the desired suckers, he transports them to a central location near Embu town where he has engaged about a dozen workers to help in preparation.

At that location, Muto holds a sucker and chops off the leaves and the tuber, then arranges them in a neat pile ready for supply.

“At the nursery, we choose three months old suckers that are healthy and blossoming so that they firm up quickly and grow. We cut the small tuber at its bottom so that once planted it does not rot. When provided with adequate water, the arrowroot matures and is ready for harvesting in five to six months,” he says.

He deals in the dasheen variety, which is common in Africa and South America. The variety takes about five to six months to maturity.

The farmer explains that arrowroots propagate themselves from the mother suckers before they are harvested.

He advises farmers to conduct a soil test on their farms to establish if they are suitable for arrowroots.

“During the growth period, a farmer should ensure the crops are not water-logged as the tubers may rot. Conversely, the soil should not dry up completely but should be moist,” he says.

Muto lauds arrowroots farming as profitable, less demanding and with a ready market.

“When you have the suckers ready, yours is just to plant, weed and after three months you add soil to the base of the plant,” he says.

Must arrowroots be grown next to a river or a wetland?  According to Muto, that is not necessary as one can grow them in the uplands by irrigation.

Arrow roots in the kitchen garden

He says a farmer can make a kitchen garden through the use of syringe polythene paper.

“The polythene paper is laid about one-metre-deep tunnel then soil mixed with manure is put on the tunnel. Once that is done, suckers are planted. The method requires very little water,” says Muto.

The farmer says the tuber is not capital intensive. “It does not require chemical sprays,” he reveals.

In planting, he directs farmers to dig holes with a diameter of one and half a feet and a depth of one foot while observing a spacing of 20cm to 30cm.

“This is a close spacing and is meant to achieve small-sized arrowroots that customers prefer as they believe they are sweeter. Bigger spacing yields bigger tubers,” he educates.

Muto urges farmers to then place the suckers inside a moist hole for a month to allow the shoots to develop, then drain the water from the hole.

“You should plant four suckers in every hole and cover them with a little layer of soil. After about two weeks, you should add to the hole manure mixed with fertiliser,” he says.

He says a farmer is able to tell a mature plant ready for harvesting when its leaves colour change from green to brownish.

He says the challenges that a farmer can expect to encounter is mainly dry spells for those who rely on seasonal rivers, which causes the crop to dry up or produce tiny tubers.

Experts say for big sized arrowroots, a farmer should observe a spacing of 30x30cm and for medium-sized ones 20X30cm.

According to Muto who currently has five acres under the crop, an acre of thriving arrowroots yields between 35 and 40 bags of 70kgs each.

With a kilogram of the tuber selling at Sh100, Muto rakes in Sh7,000 per bag, which would translate to Sh245,000 per acre if a farmer harvested 35 bags and managed to sell all of them.

He sells a sucker at between Sh10 and Sh30 depending on its size.

Muto uses Home Drop App available in google play store to deliver his products to customers. He hopes to start exporting the tubers in future.

How a teacher found an extra income in arrowroots

When he is not in class teaching, Francis Maathai can be found at his Modern Tech Nurseries attending to his dryland arrow roots or dealing with clients.

A teacher by profession, Maathai says he came across the dryland arrowroot variety in May 2017 when he attended a farmers’ open day at Thika.

“It was Dasheen variety which originated from Rwanda. I was hooked. What I liked most about the variety is that it is not a must you plant it where there is water,” says the Primary School teacher from Ndundori Centre in Nakuru County.

“It does well also where there is a shortage of rain or water hence it is a good plant that can help us achieve food security,” says Maathai.

The arrowroot variety bears long tubers measuring up to 70 centimeters and it is heavier than others, therefore, making it popular among business people and even consumers.

The variety matures in six months.

When he planted on his farm, many people asked for the seedlings. He could not meet the demand. This gave him a business idea.

“Every two and a half months, one plant gives me ten suckers which I sell for Sh10 each. One acre has the ability to produce three tonnes of mature arrowroots. If you sell at the current price of Sh100 per kilogram, you will earn Sh300,000 after six months,” says Maathai.

To get more clients, he says he attends agricultural shows in the country, farmers’ open days and agricultural exhibitions. Others clients are through referrals.

“In the three years I have practised this agribusiness I can’t regret. I have managed to buy one acre of land in Nyandarua County which I plan to put under arrowroots as well as expand my suckers production venture,” he says.

“I would recommend this to any farmer out there as you only use animal manure to plant and you don’t need any chemicals or fertilizer. You just mix the manure with some ash to give it the much-needed minerals. You then apply mulching to maintain the moisture in the soil and you are done. Therefore, you don’t need a lot of capital to start and the returns are high,” says Maathai.

“I urge the youth to enter into agribusiness. If you visit supermarkets these days, the food section is getting bigger and we need more young farmers to enter into food production,” he says.