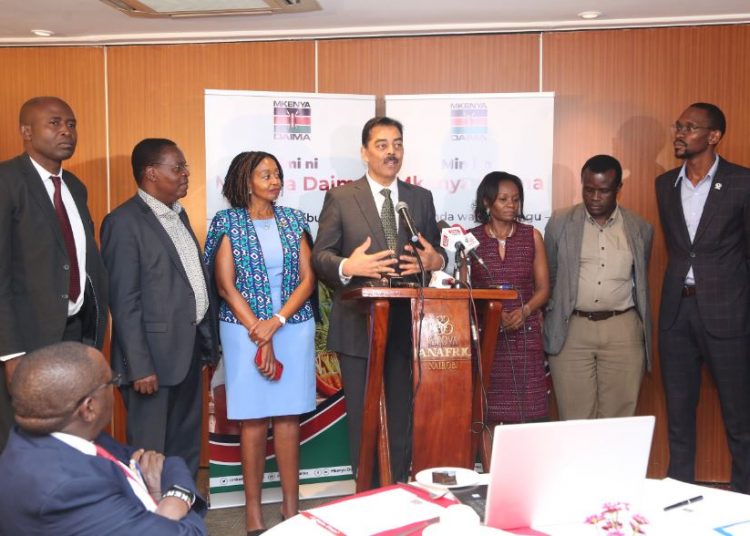 Vimal Shah, Chairperson Mkenya Daima Steering Committee (behind Podium), seen here addressing the media during the launch of the Mkenya Daima Initiative 2022. With him are members of the Mkenya Daima Steering Committee. (From Left), Daniel Juma from Global Peace, Dr. David Oginde from the Evangelical Alliance of Kenya, and Flora Mutahi, KEPSA Chairperson. From right is Duncan Mochama from the Africa Youth Leadership Forum, Suba Churchill from the Civil Society Reference Group, and Carole Kariuki, CEO KEPSA. [Photo/ Courtesy]

A consortium of multi-stakeholders, which include the private sector, the religious sector, the civil society, the media, the diplomatic community, the public sector (both at the national and county level) and organized sector groups including women and youth, has announced the kick-off of the Mkenya Daima electoral sensitization initiative, ahead of the general elections slated for August 9th, 2022.

The Mkenya Daima Initiative is a non-partisan multi-stakeholder platform whose primary purpose is to inspire Kenyans towards peaceful elections and prosperity thereafter. Building on the interventions and lessons learned in the previous phases, which took place in 2012 and 2017.

Mkenya Daima 2022 will seek to engage primarily with new and lapsed voters between the ages of 18 and 34 years on diverse topics around peaceful electioneering and responsible voting while championing a people-centered and economic-led manifesto with all presidential aspirants.

Today’s launch forms the fifth phase of the Mkenya Daima initiative where we will not only focus on pushing for peaceful and credible elections and a smooth transition of leadership, but also seek to rally Kenyans around their civic duty to vote and choose the right leaders at every level with the rallying call, Nitatenda Wajibu Wangu (I will take responsibility), which builds on the previous rallying call, Wajibu Wangu”, said Vimal Shah, Chairman of the Mkenya Daima Steering Committee.

Calling on all Kenyans of goodwill to support this year’s cause and for Kenyans to join the rallying call “Nitatenda wajibu wangu”, KEPSA Chief Executive Officer, Carole Kariuki, representing the private sector, encouraged young people to start interrogating political party manifestos and make it a practice to hold political leaders accountable based on the promises therein.

“Elections are not a life-or-death activity; we should be able to continue with our lives as normal without interruptions by campaigning peacefully, voting peacefully, and accepting the results peacefully,” she said.

Other stakeholders who spoke at the event included Dr David Oginde from the Evangelical Alliance of Kenya, who said he called on religious leaders to urge worshipers, whom they meet every week, to behave responsibly and ensure that the nation is peaceful.

“Irrespective of your status in society, if chaos breaks out in this nation, whether from within or without, once you get out of the borders of this nation, your name changes to refugee, and so we must work hard to build this nation together,” said Dr Oginde.

Suba Churchill, representing civil society, noted that the Mkenya Daima initiative is committed to working with and supporting institutions that are charged with the mandate to oversee elections to ensure that they deliver effectively, devoid of the challenges that have been experienced in the past. He also pointed out the need to interrogate the contents of the ethical aspirations of leaders seeking elective positions.

On his part, Daniel Juma, Executive Director of the Global Peace Foundation, urged politicians and Kenyans alike to send out positive messages of peace, noting that Kenya is not unique to other democracies in the level of political excitement during the electioneering period, noting that as a vibrant democracy, this is expected but which does not in any way translate into antagonism and even violence.

Duncan Mochama from the Africa Youth Leadership Forum cautioned against the spread of fake news and propaganda online with the aim of causing division and strife while urging the youth to be careful not to be exploited by politicians.

“The history of Kenya and Africa in general has taught us that youth have a much bigger role to play when it comes to elections and the management of them, and this can be seen in the sheer number of those who have stood up to vie for elective positions and also in their management in the upcoming elections,” said Mochama.

Read: Investment Opportunities That You Can Reap Millions During The Political Campaigns Season

Flora Mutahi, KEPSA Chairperson, assured the Mkenya Daima Steering Committee that all organizations under the KEPSA umbrella will stand for a peaceful election. She appealed to all Kenyans to also commit towards a peaceful election, noting that KEPSA was working with other government agencies and institutions to ensure transparency and fair election management.

Previous initiatives under Mkenya Daima saw the country experience relatively peaceful elections in 2013 and 2017. This year’s phase will work with the current and aspiring political leaders who have expressed interest in running for the Presidency and present the proposed private sector manifesto with a view to influencing political party manifestos to focus on people-centered and economic-led transformation.

Read: Meet The Three Individuals In Kenya That Beat President Kenyatta In Terms Of Wealth

In addition to public awareness campaigns such as media forums and local community advocacy and engagements, we will host the 3rd National Leadership Summit and Political Debates in collaboration with the media, “explained Kariuki.

Mkenya Daima believes that voting is an all-important and empowering democratic process that enables one to exercise their right to elect men, and women who will determine the country’s socio-economic future and growth through delegated power on the ballot.

“Chapter six of the Constitution of Kenya speaks of the leadership and integrity of state officers and elected officials as a critical ingredient of national progression and prosperity. It is utterly crucial that every adult citizen takes this time and consideration to consider electing service-oriented leaders who embrace accountability and integrity,” said Shah.

This, he added, would ensure that those entrusted with the management of Kenya’s public affairs and resources are people of good character, probity, and uprightness.

Read: Opinion: Why Local Manufacturing Should Matter To Political Candidates